“Na Moolelo o Kou Aina Makuahine”: Our Kūpuna on Sovereignty and the Overthrow

As many of us know, January 17, 1893 is the anniversary of the overthrow. 124 years ago today. For some, that seems like a long time ago, but the truth of it is that we are only a few generations removed from that day. The stories we tell in our families reach back hundreds of generations, so a hundred years is just an eyeblink for us. That day is a fresh wound, a sharp pain, a crisp memory. And we think about the overthrow every day, not just on its anniversary, because we continue to feel its effects every day. Yet the aloha ʻāina instilled in us by our kūpuna drives us to demand better stewardship for our land, to push for genuine security for our vulnerable peoples, to heal through the pain, to keep fighting until there are none of us left. So on this anniversary of that painful day, let us find hope and comfort and fire in the words that our kūpuna have left for us.

Joseph Mokuohai Poepoe was a true renaissance man who was a politician, scholar, writer, lawyer, historian, and newspaper editor. One hundred and eleven years today, he wrote an article in his newspaper Ka Na’i Aupuni, that reminds us of the power of knowing our moʻolelo:

[‘A ready knowledge of the moʻolelo of your motherland is the first knowledgeable step in political action that will enable you to fight for the pono of our governance.’] (January 17, 1906, Ka Na’i Aupuni)

David Kahalemaile gave a speech in Mānoa to commemorate Lā Hoʻihoiʻi Ea in 1871, speaking of ea as something that is absolutely necessary for our survival:

Emma Nawahi, as pictured in the San Francisco Call

Beloved aloha ʻāina, newspaper editor, and leader of the Hui Aloha ʻĀina no nā Wāhine, Emma Aima Nawahi spoke out against annexation at a public meeting in Hilo in 1897. An American journalist named Miriam Michelson reporting for the San Francisco Call reported what Emma Nawahi said through an interpreter:

“Our one hope is in standing firm—shoulder to shoulder, heart to heart. The voice of the people is the voice of God. Surely that great country across the ocean must hear our cry. By uniting our voices the sound will be carried on so they must hear us.” (Sep 30, 1897, San Francisco Call)

Kuaihelani Campbell, as pictured in the San Francisco Call

At the same meeting, Kuaihelani Campbell, who was also a leader of Hui Aloha ʻĀina no nā Wāhine and a powerfully influential woman, exhorted her people to:

“Stand firm, my friends. Love of country means more to you and to me than anything else. Be brave; be strong. Have courage and patience. Our time will come. Sign this petition—those of you who love Hawaii. How many—how many will sign?”

And we know how many answered that call.

Due to her youth, beauty, and untimely death, Princess Kaʻiulani is oftentimes portrayed as a demure and gentle woman, sometimes even fragile, but nothing could be further from the truth. Her words show the fire that burned within her for her lāhui, particularly in this letter she wrote to the American people in March of 1893:

“Seventy years ago, Christian America sent over Christian men and women to give religion and civilization to Hawaii. Today, three of the sons of those missionaries are at your capitol asking you to undo their father’s work. Who sent them? Who gave them the authority to break the Constitution which they swore they would uphold? Today, I, a poor weak girl with not one of my people with me and all these ‘Hawaiian’ statesmen against me, have strength to stand up for the rights of my people. Even now I can hear their wail in my heart and it gives me strength and courage and I am strong – strong in the faith of God, strong in the knowledge that I am right, strong in the strength of seventy million people who in this free land will hear my cry and will refuse to let their flag cover dishonor to mine!” (History of Later Years of the Hawaiian Monarchy and the Revolution of 1893 by W. D. Alexander, pg 78)

In 1900, the newspaper Ke Aloha Aina, founded by Emma and Joseph Nawahi, published a series of articles written by Edward Kekoa, calling for the lāhui Hawaiʻi to remain steadfast:

“E hoʻomau i ka hōʻole ʻana aku, ʻaʻole loa he kuleana o ke aupuni ʻAmerika e hana mai ai i aupuni no kākou e ka lāhui Hawaiʻi, me he mea lā, he lāhui aupuni ʻaʻole kākou mai mua, i kohu ai ʻo ia e hana mai i aupuni no kākou” [‘Remain steadfast in your refusal; the American government has no true kuleana to build a government for us, O lāhui Hawaiʻi, as if we did not already have a nation, and it is somehow fitting for them to fashion a government for us’] (March 3, 1900, Ke Aloha Aina)

James Kaulia and David Kalauokalani in the San Francisco Call

James Kaulia, who headed various aloha ʻāina organizations such as the Ahahui Hawaii Aloha Aina, and who would later travel to Washington D.C. to deliver the anti-annexation petitions, called the lāhui to bravery and struggle in a speech given in 1897:

“Nolaila, mai makau, e kupaa ma ke Aloha i ka Aina, a e lokahi ma ka manao, e kue loa aku i ka hoohui ia o Hawaii me Amerika a hiki i ke aloha aina hope loa. E hoomau ia ko kakou Kuokoa a i Aupuni Kuokoa malalo iho o kona mau Kanawai ponoi, nolaila, mai ae kakou e hoohuiia ko kakou Aina me Amerika.” [ʻTherefore, let us be fearless; stand fast in our aloha for the ʻāina, and stand together in the thought that we should forever resist and oppose the annexation of Hawaiʻi by America until the very last aloha ʻāina. May our independence and our independent government be continued under its own laws, so let us ever refuse that our land be joined with America.ʻ] (September 11, 1897, Ke Aloha Aina)

Kahikina Kelekona, author of the account of Kaluaikoolau and the biography of Joseph Nawahi

Kahikina Kelekona was one of the most celebrated and boundary-pushing writers of his time in both Hawaiian and English. Part of a mutli-generational newspaper family, Kelekona was an outspoken aloha ʻāina who put his vast literary skills to work in support of the nation:

“He minamina a he aloha i kuu lahui me ke one oiwi. Pehea oukou e na hoahanau o ka puhaka hookahi! E Hawaii!! e ala, a mai ae aku i ka enemi e alakai wale ia oe e like me kona makemake, aka, e ao aku, e hoike aku aole i pau loa na iwi kuamoo, aka, ua puipui loa” [ʻI have great aloha and deep affection for my beloved lāhui and native sands. Listen, O family of the same womb! O Hawaiʻi! Arise, and do not let the enemy lead you around as he desires, but teach him, show him, that our spines our not broken, that they are stronger than ever!” (March 25, 1875, Ka Lahui Hawaii)

Liliʻuokalani on a country visit

In her book, Hawaii’s Story by Hawaii’s Queen, first published in 1898 in English and later translated for the Hawaiian-language newspapers, Queen Liliʻuokalani speaks of the power of the aloha ʻāina she sees in her lāhui:

“For patriotism, which with us means the love of the very soil on which our ancestors have lived and died, forbade us to view with equanimity the sight of any foreign flag, not excepting the one for which we have always had the greatest respect, floating as a matter of right over any part of our land.” (38)

Later on in the book, when she is speaking of the courage of the patriot Joseph Nawahi, she reminds the lāhui, however, that

“The cause of Hawaiian independence is larger and dearer than the life of any man connected with it. Love of country is deep-seated in the breast of every Hawaiian, whatever his station.” (302)

Nawahi was also an accomplished painter. “View of Hilo Bay,” 1888, oil on canvas

Joseph Nawahi is one of the most well-known and well-loved aloha ʻāina from the kingdom era because of his skilled ʻōlelo, his unwavering dedication to a lāhui built on pono, and his determination to always back his words with actions. 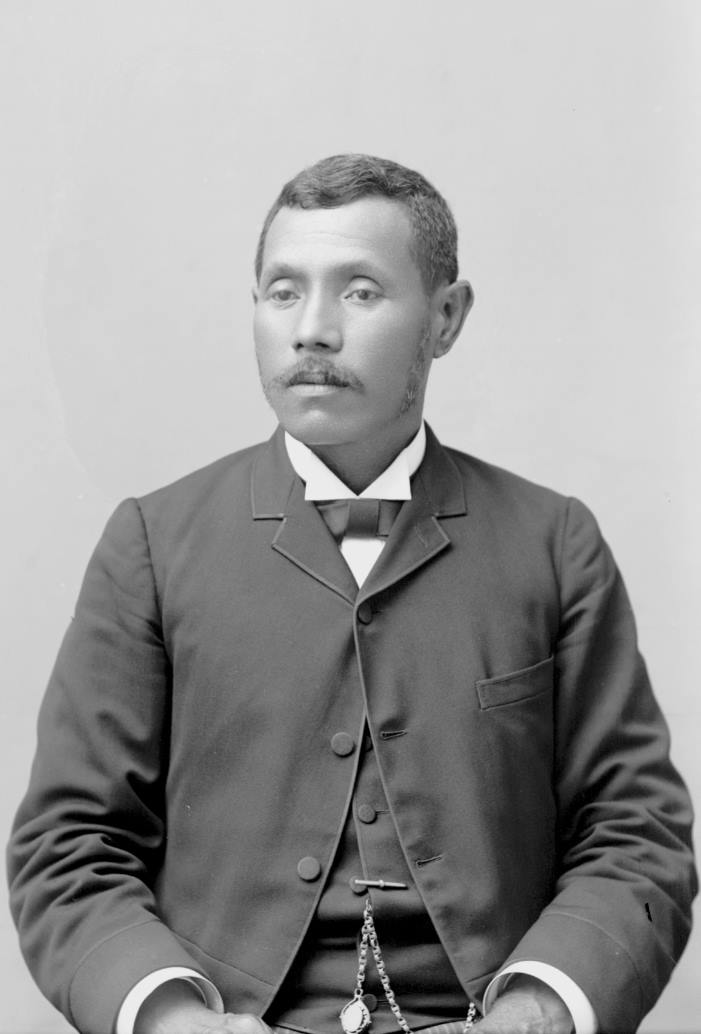 In 1894, Nawahi gave one of his most famous speeches at Palace Square to 7,000 makaʻāinana who had gathered there. In it, he said:

[ʻIt gladdens my heart to see all of you, my beloved fellow citizens. You have answered the call of your leaders, gathering us all together this evening. This house of government belongs to us, just as the Kamehamehas intended; yet on the 17th of January, 1893, we were kicked out by trespassers who entered our house, and they are telling us to go and live in the lei stand* that they thought to build and shove us into. But what I have to say to you, my beloved people, is let us not agree in the slightest!’] (July 3, 1894, Ka Leo o ka Lahui)

*This can also be translated as “unstable house,” but it seems likely that multiple meanings were in play here.

The last piece is a powerful article that Joseph Nawahi wrote on what aloha ʻāina means, but I have chosen to leave it untranslated.

A note on translation: Translation is interpretive by nature, so I suggest that you take all of these translations with a grain of salt. Different people will have different readings of the text, and multiple readings are the best way to get closest to the meaning of the Hawaiian, though there is no substitute for reading the original.

All images come from Wikimedia Commons, except for the newspaper images, which are from nupepa.org.