Let’s Be Science Fiction: Imagining New Stories for Our Futures

“the pursuit of sovereignty is an attempt to revive not our past, but our possibilities.”
—Scott Richard Lyons (Ojibwe/Mdewakanton Dakota)

Hawaiians are not science fiction. We are not futuristic. No indigenous person is. At least that is what they seem to be telling us. We are not in any of their visions of the future. We do not go boldly where no man has gone before. “Excelsior” doesn’t translate into any of our languages. We are not John Carter of Mars or Buck Rogers in the 25th Century or Flash Gordon of wherever and whenever he was supposed to be from. If we do show up, it is as Nalo Hopkinson says in her introduction to So Long Been Dreaming: Postcolonial Science Fiction and Fantasy: “one of the most familiar memes of science fiction is that of going to foreign countries and colonizing the natives . . . for many of us, that’s not a thrilling adventure story; it’s non-fiction, and we are on the wrong side of the strange-looking ship that appears out of nowhere.”

They don’t seem to really want us in their present either. We only belong in their past. Just look at the comments section of any newspaper article on indigenous struggles against colonialism, to prevent mining companies and pipelines from destroying our mother, to prevent free trade agreements that leave us anything but free. Astronomer Tom Kerr wrote about the fight over telescopes on Mauna Kea in 2011, saying: “It seems to me that it’s an argument about returning to the stone age versus understanding our universe and it’ll be interesting to see who wins in the end.” We are impediments to progress. We want to keep everyone in the Stone Age. We should be thankful for the gifts of colonization. We need to accept reality and stop living in the past.

Yet if any of that were true, how is it that on these islands, surrounded by the vast blue Moananuiākea, you will find some of the most futuristic places imaginable? They are terraced stone nestled in wrinkled green valleys. Breathing fishponds dozens of acres in size sitting at the generative convergence of fresh and salt water. Platforms for ceremonies that reaffirm our genealogical connection to land. In those places, you will find people building and rebuilding dry stack rock walls, some of which have stood for six hundred years. You can join in as they retell the stories of their land, speak the names of those who came before, plant garden beds for food and medicine, practice traditional aquaculture, share agroforestry traditions from other Pacific islands, reforest with native species, and engage in community food production. Paepae o Heʻeia, Hui Mālama i ke Ala ʻŪlili, Hoʻoulu ʻĀina, Papahana Kuaola, Hui o Kuapā, Waipā. These are just a handful of names for the future.

To those people who are so certain that we are stuck in the past, this will sound like the opposite of futuristic. These aloha ʻāina who work the land don’t use any flying cars or cybernetic implants or robot servants. They use picks and shovels and rubber boots. And if their projects have funding, chainsaws and backhoes. These people who have love for our future are restoring the traditional agricultural systems that were there before. They have built and blessed traditional hale pili, grow traditional medicines and make tinctures, and produce enough food to give away.

Maybe restoring traditional agricultural sites and practices sound like nothing more than our stubborn Stone Age beliefs. Yet why must our futures only be filled with sleek spaceships, terraforming new planets, and people vacuum-sealed from having any connection to the land? No one ever saw the Jetsons working in a loʻi. No one ever saw the Jetsons even breathing fresh air outside of a dome.

What makes these places futuristic is imagining with the land. They know that restoration can take generations. Hoʻoulu ʻĀina even has a two hundred year work plan. That is science fiction. That is worldbuilding. That idea of still being on the land in two hundred years is imagining beyond the limits placed on us by those who only care about the now. It even imagines beyond our own bodies and relatively short lives.

But all of this takes a massive shift in our thinking. Major decisions now are structured by things like election cycles and fiscal years, plans that look a handful of years into the future at most. We must not lose the urgency of our daily struggles, but what if we did not measure time by our fragile flesh and bones? What if our decisions were based on the lifespan of our people? What if we tried to live according to the timescale of the ‘āina?

Our stories can show people what this will look like. Our moʻolelo have always been for the future. As many of us know, when mele were not being printed in their entirety in a telling of the Hiʻiaka moʻolelo in 1862, J. H. Kānepuʻu wrote about the importance of preserving the entire story, because: “E hele ana kakou i ka nalowale . . . E makemake ana ka hanauna Hawaii o na la AD 1870, a me AD 1880, a me AD 1890, a me AD 1990” (ʻWe are all going to disappear. . . The generations of Hawaiians in 1870, 1880, 1890, and 1990 will want [these stories].) And while we have much to learn and teach from our traditional moʻolelo, we need to tell new stories as well. Stories that will help us imagine the future; stories that will help them imagine the future.

As the visionary scholar Walidah Imarisha says: “we absolutely need fantastical genres like science fiction, like fantasy, genres that not only allow us to step beyond the boundaries of what we are told is possible, but demand that we do, demand that we engage our imaginations. Because all real deep substantive social change has been considered to be utterly unrealistic when it happened. We need genres like these so we can learn to start not with the question “What is a realistic change or win?” but with the question “What is the world we want to build?””

So what is the world we want to build? We can do better than futures filled with endless wars against those who are different from us, post-climate-apocalypse societies replicating the oppressive power structures we live in now, voracious colonization in the name of exploration. A world where the ocean is made out of plastic. Where climate departure is arriving in 2043. Where masculinity is still defined by your capacity for violence. Where our queer/Black/Brown/Latinx friends still say, “They just want to kill us.”

Our futures belong in science fiction, and our stories can show people a better way to live. Put us back on the right time cycles. Expand our vision. Show us how to reclaim the expansive beauty of aloha. Build the foundations for the generations that people like Kānepuʻu wrote for. The imaginative foundations for a world where we are all meaningfully dealing with anti-blackness and anti-indigeneity and heteropatriarchy in our own communities. Where we are sovereign over our food, our bodies, our land. Where we feel vulnerable only because we are opening ourselves up to create and not because we are in danger.  Where we all feel cared for. Where kākou is truly inclusive. Where land is ancestor to all of us.

If you want to join in on this effort of writing new stories to help envision our futures, please consider submitting short fiction or poetry to our new anthology Nets for Snaring the Sun: Speculative Works from the Pacific. 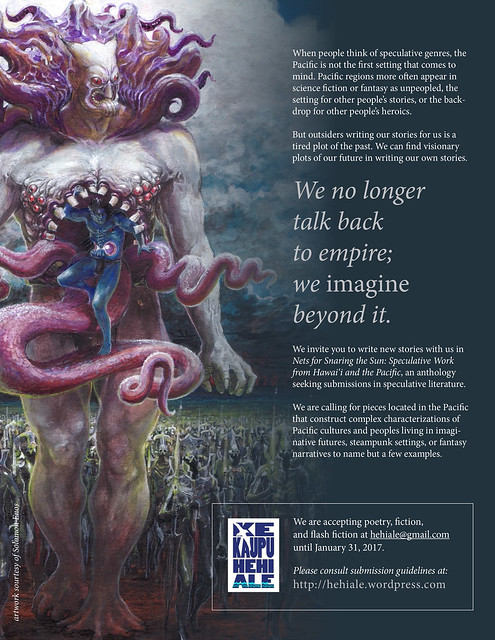 2 thoughts on “Let’s Be Science Fiction: Imagining New Stories for Our Futures”