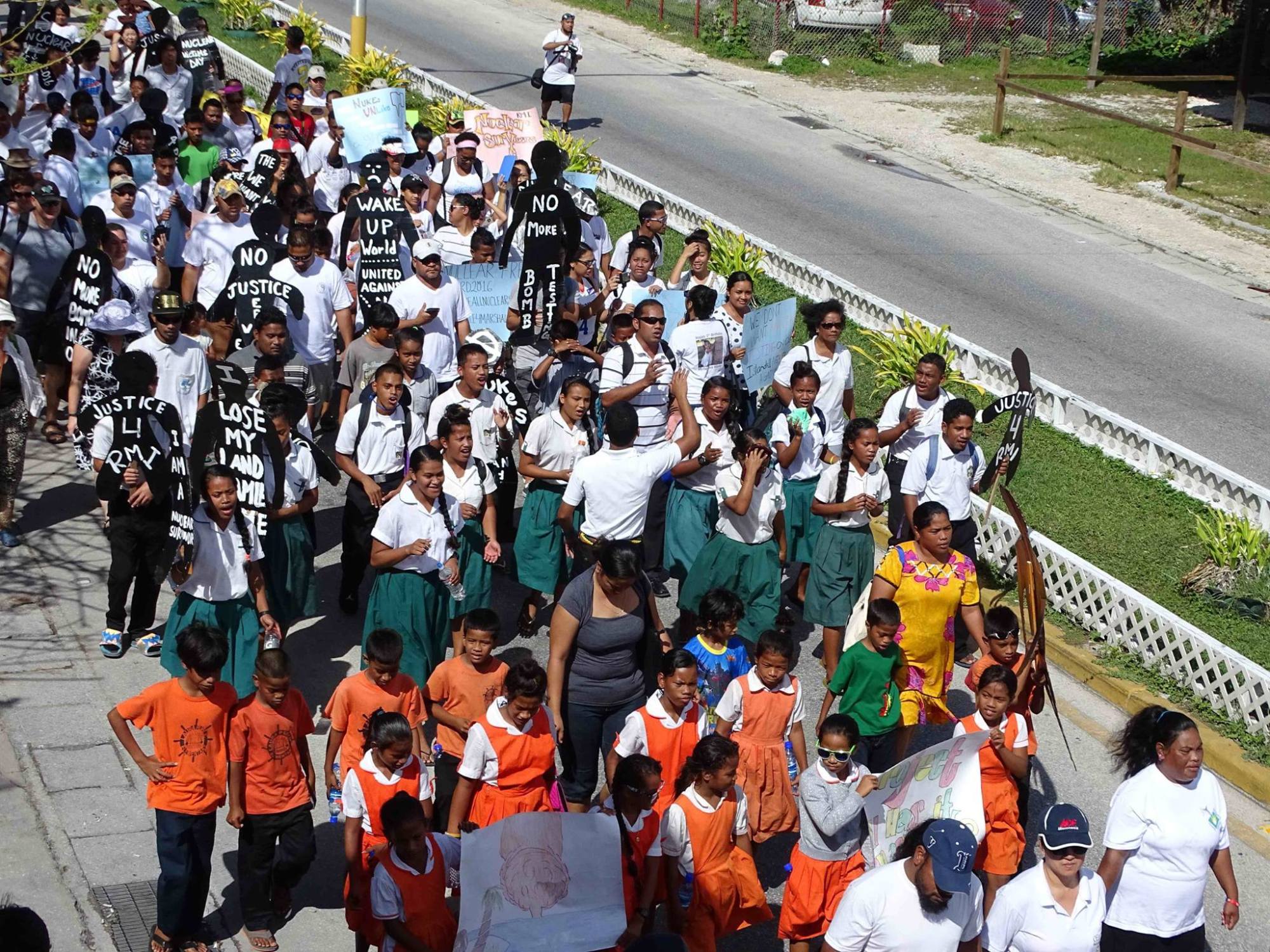 Shadows of our Past: Nuclear Day 2016 in the Marshall Islands

March 1 in the Marshall Islands is Nuclear Victims Remembrance Day. On this day we commemorate the legacy of US nuclear testing on our islands. It’s the year 2016 – which means it’s been 70 years since islanders from Bikini atoll have been exiled from their homeland, forced to live on Kili island, an island now at risk of going under water.

We have already known the pain of lost homelands – some more than others. But most of us don’t want to remember it.

We commemorated the day with a march that ended with a ceremony at Delap Park – our group, Jo-Jikum had decided on a theme: “shadows of our past.” Cutouts in cardboard painted black by College of the Marshall Islands students, each a symbol of a family member lost. Figures of warrior ancestors sawed from plywood by workers from Majuro Atoll Waste Company (MAWC). One side plastered with facts, statistics, like how much money you get if you discover you have leukemia, brain cancer, liver cancer, if your child is born with severe disabilities, if you have a tumor or beta burns. No one gets money if you die. Over 50% of the Marshallese who have received “personal injury awards” (money given if you discover you have the right type of cancer) have died before receiving full compensation for their injuries. Jortake Enne passed away after receiving only two thirds of her $12,500 award.

How much is a life worth anyways?

After the ceremony and march, I came back to the house to basically crash – it had been a long day and it was only noon. My cousin came over to pick up our spare bed. The spare bed is in an unused room, with my mother’s clothes folded and stacked all over it in neat piles.

My cousin’s family is just finishing up the construction of a new house. Their old house in Rita, the one she’s lived in all her life, was destroyed during the king tide season two years ago. They’ve been saving up, moving from house to house, taking out loans and navigating new sources of family tension, since that day. And now they’re nearing the close of this chapter, finally close to moving into their new home. Just one bed away.

I thought about this as I helped sift through mom’s clothes on the bed. We’ve already shouldered the burden of nuclear testing, given to us for the sake of industrialized power, greed and wars. We have marched shouting to a world that wouldn’t listen, that doesn’t remember – advocating peace, humanity, and willing the world to find its balance. All we had, as Teresia Teaiwa aptly pointed out in her recent post, was our moral argument. The simple notion that it was wrong. And we’re doing it again. This time – willing the tides back.

At the ceremony yesterday, the US Ambassador stated in his speech that, “full and final compensation has been paid.” This is untrue. According to the Nuclear Claims Tribunal over $2 billion dollars are still owed to the Marshallese people. Justice has not been served. But even if it was, at least in the form of monetary payment – would it be enough? Would it be enough now that we are without our islands? With climate change we ask the same questions – how much money will they shove at us to keep us quiet – to convince the world there never was a Marshall Islands?

The fight is long, and it might not ever end. But we have to keep going. Keep voicing these stories. Keep willing the world to find its balance. For as long as it takes.

One thought on “Shadows of our Past: Nuclear Day in the Marshall Islands”