The Mana of Wansolwara: Oceanic Art/Story as Protest and Decolonial Imagining
by Tagi Qolouvaki

I have been writing this over the miles of salt water between Hawaiʻi and Turtle Island, over the miles of asphalt between the Bay Area and L.A., between beloved communities and family (biological and queer/chosen), and between indigenous lands and people in struggle against American occupation and neoliberalism and all it has wrought on their/our/everyone’s wellbeing—ecological, spiritual, intellectual, physiological—on the very survival of all living beings. Deborah Miranda’s poignant memoir, Bad Indians accompanied me on the road to L.A. through Ohlone to Tongva lands and back, making me salt-water witness to the depth and layers of trauma missionization bore into the people and their lands under Junipero Serra, whom the Vatican is set on canonizing! My Facebook and Instagram feeds were the whole time flooded with news of the work of aloha ʻāina and kapu aloha activists in resolute protection of sacred Mauna a Wākea, and that of artists and activists all over Oceania and Turtle Island in support of West Papua’s freedom from Indonesia’s genocidal, 50-year occupation.

In the introduction to her project to story her people through and against the violence of the missions then and now, Miranda writes, “California is a story. California is many stories. As Leslie Silko tells us, don’t be fooled by stories! Stories are ‘all we have,’ she says. And it is true. Human beings have no other way of knowing that we exist, or what we have survived, except through the vehicle of story” (xi). I am kai viti, an indigenous Fijian-Tongan away from home for the good balance of my life now—first on Turtle Island and now in Hawaiʻi. I am blessed to have found family/community in both places, and to witness and learn from the resistances of indigenous and allied communities in response to the daily, crushing onslaught of American empire. In the face of inherited and ongoing traumas, Ke Kaʻupu Hehi ʻAle is one example of family/community forged around and through creativity, art-story, scholarship-story and activism-story to support our survival and imagine our thriving against the odds. We grieve, heal, and imagine decolonial possibilities through activist art/story, in community; stories are all we are, have and all we can be/imagine. This blog entry is one attempt to bear witness to and articulate gratitude for Oceanic art/story as protest and decolonial imagining.

I could not help but think of our own teller of tall (and ribald) tales, Epeli Hau’ofa (as must every one of our Oceanic family) as I flew over 2,300 miles of moana nui/wasawasa. Speaking of Islanders reasserting ancient canoe-mobility and forging alliances in the Diaspora with Hawaiians and Māoris, Hau’ofa mused in that sight-full way of his, “It is not inconceivable that if Polynesians ever get together, their two largest homelands will be reclaimed in one form or another” (35). While the reclamation of all the indigenous homelands of Oceania, including Hawaiʻi, Guahan, Aotearoa, Kanaky, West Papua, French Polynesia, and American Samoa, will require power beyond the work and resources of generations across Melanesian, Micronesian, and Polynesian cultural and national “boundaries,” when we witness the activism and art/story coming out of Oceania (including the Diaspora) for Mauna a Wākea, for West Papua, for those of our islands most immediately vulnerable to climate change, we can almost taste Hau’ofa’s vision. A wansolwara (one salt water) united in kinship, love and reverence for our ancestors and sacred places—which amounts to the entirety of Oceania—in stories, song, dance, visual art, theater, rallies, marches…is a wansolwara of undeniable mana.

Our wansolwara is seeded through story. And like our traditions of seafaring to expand Oceania, our use of creativity, art/story to effect social change is not new. Caroline Sinavaiana and Vilsoni Hereniko have written extensively of Polynesian theater traditions of clowning to subvert and critique the dominant order; in Hawaiʻi there are multiple examples of 19th and 20th century Hawaiian newspapermen loyal to the Kingdom writing and serializing oral narratives to inspire and manifest the hulihia, or overturning, of American occupation (see for example kuʻualoha hoʻomanawanui’s work); and in 1975, Kanak independence leader and statesman, Jean-Marie Tjibaou helped to bring about the first Festival of Melanesian Arts in Kanaky to forge a proud and unified Kanak, Melanesian identity in the wake of French colonialism and occupation, which included the staging of the play Kanaké co-written with Georges Dobbelaere. There exists too a long tradition of songs of resistance, including Ellen Kekoaohiwaikalani Wright Prendergast’s “Mele ʻAi Pohaku/Kaulana na Pua” written in 1893 to protest America’s illegal overthrow of Queen Liliʻuokalani and the ni-Vanuatuan band Huarere’s “Nuclear Free” song performed at the Nuclear Free and Independent Pacific conference in Vanuatu in 1983, for example, and a rich body of Anglophone and Francophone decolonial literature flourishes in Oceania, amongst many other Pacific art/story traditions as resistance, such as dance, tattooing, quilting, or canoe-building and sailing.

Here in Honolulu every year I witness and learn anew from the work of the Hawaiʻi Ponoʻī Coalition’s Mai Poina walking tours, which combine theater, oli, slam poetry and talk story to lay bare the truths of the overthrow of the multiracial Hawaiian Kingdom. And as a queer-identified Islander, I have been blessed to work with queer Pacific arts groups (my families, to be real) like U.T.O.P.I.A. San Francisco, for whom traditional and contemporary Pacific dance and song was always central to its mission, as well as OLO (One Love Oceania), a queer women’s arts collective in Oakland, and Nolu Ehu, a Nesian arts collective in Honolulu, both of which challenge settler colonialism, racism, homophobia, and misogyny using contemporary and traditional art forms to tell stories of queer Indigenous Pacific genealogies and survivance, of queer, Indigenous Oceanic love.

While artists and activists consistently respond with creative/storied protest across Oceania to injustices occurring throughout our wansolwara—aided as much by the connections made possible by social media platforms as by our kinship networks—not since the launch of the Nuclear Free and Independent Pacific (NFIP) movement in the 70s has there been so much pan-Pacific unity around an issue as that of West Papua. Like the NFIP movement, this is a grassroots movement. Both movements of our salt water people have had to stand strong against incomprehensible power—of capital, militaries, occupying regimes/the support of nation states powerful in the region, such as the United States, Indonesia, Australia, and unfortunately in the case of West Papua, some of our own “independent” Pacific nations like Fiji and Papua New Guinea, and both necessarily utilize Pacific arts/stories and kinship (most recently we witness a turn to Melanesian unity and pride in the campaign to free West Papua) for mana-full resistance and an Oceanic imaginary that is decolonial, contagious and muscled.

Through deft use of community resources, art, and social media networks (see Jason Titifanue, Glen Finau, Jope Tarai and Romitesh Kant’s work for more on social media, decolonization and West Papua), artists and activists throughout Oceania have helped to make kin-flesh of stories of Indonesian violence (financed in part by corporate allies, like Freeport-McMoran and Rio-Tinto), on West Papuan lands, communities, bodies while mainstream and state-sponsored media comply with Indonesia’s media blackout. Groups like Oceania Interrupted, a collective of Māori and Pacific women in Aotearoa/Niu Sila have managed to bring local, regional, and international attention to West Papua’s plight through silent performance art/actions in public spaces—from busy public intersections to a local Pasifika festival. Locally, the poets, scholars, teachers, artists and activists that make up Ke Kaʻupu Hehi ʻAle and the Hawaiʻi Bleeds Black and Red hui—this family/community I belong to that makes movement forward through collective trauma possible, one poem-song at a time—hosted Wansolwara Voices for West Papua, joining our furious aloha through visual art, poems, and songs in mourning, in solidarity and struggle to those of wansolwarans on Turtle Island, in Fiji, Aotearoa, and across our sea of islands. Our collective dream: a free and independent West Papua. 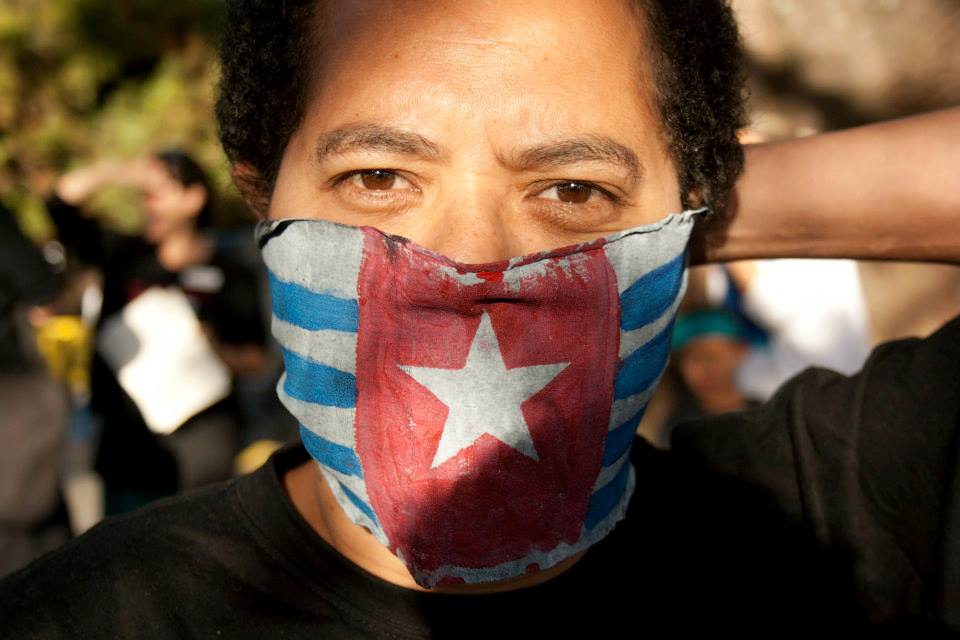 I learned a Fijian proverb recently (via Eci Kikau’s The Wisdom of Fiji): a kena laya sa vakaoqo, sa drau na kena votu (its buds—the calyx of the breadfruit—are like these, its fruit will be hundreds). From seed beginnings, great things will come. And so the art, the stories, the movements for a free West Papua, Hawaiʻi, Guahan, French Polynesia, Kanaky, Aotearoa, American Samoa—a free Oceania—were seeded by our ancestors; they are bearing fruit.

One thought on “The Mana of Wansolwara: Oceanic Art/Story as Protest and Decolonial Imagining”