Last week, just after the US Department of Interior released their proposed “Path for Re-Establishing Government-to-Government Relationship with Native Hawaiian Community,” I was talking story with a friend. She said to me, “these are exciting times!” I was taken aback. Although I knew that she supports federal recognition, her words jarred me because my experience of these times has been anything but exciting.

Dangerous. Divisive. Violent. These are the words that come to mind when I think about my own experience of these weeks leading up to Naʻi Aupuni’s Native Hawaiian election. Dangerous, because I know that the state and federal governments want an entity with whom they can negotiate to settle Hawaiian claims for our national lands and sovereignty. Divisive, because I am seeing Kānaka attacking other Kānaka under the pressure of this state-initiated process, blaming each other rather than critiquing the larger power structures that got us here. Violent, because I read the DOI’s recent 20-page proposal as one more attempted erasure of a significant segment of our community who still wants our independence.

In dangerous, divisive and violent times, people sometimes react out of fear. In this situation, it turned out that I was one of those people. The Native Hawaiian Roll commission used the mantra, “unrelinquished, undeterred, unified.” I felt none of those things when, a little less than two years ago, I submitted my name to Kana‘iolowalu. I enrolled not because I supported the process, but because I saw its incredible danger. Like many others, I became a victim of the exploitative fear tactics that were being used to scare people into so-called unity.

“LEFT OUT,” a full-page article in the August 2013 issue of OHA’s newspaper declared in big, bold, red letters. The article went on to say that the state law that created the Native Hawaiian roll, Kana‘iolowalu, 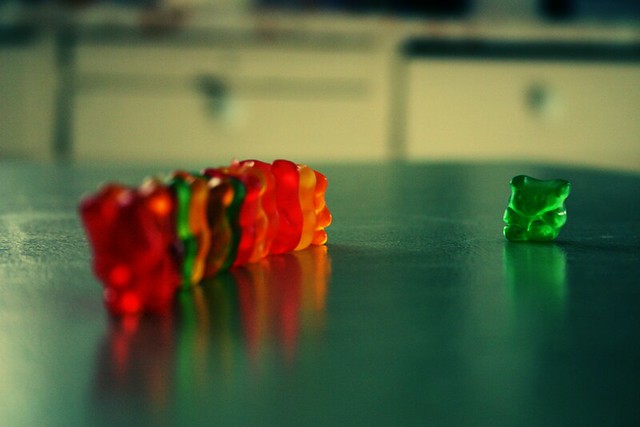 At the time, I was already critiquing the process and the exclusionary nature of the roll, but I am human and imperfect. I was pregnant, feeling overwhelmed by the everyday stresses of life and the powerful emotions of wanting to protect my children.

As the closure of the roll approached in January 2014, fear of the unknown got the best of me. I knew a state-sponsored process was not an act of self-determination. But at the same time, I didn’t see an organized movement against the roll. I could not see a safe path forward for my children. Without a larger movement to protect against the dangers of exclusionary rolls and settler land grabs, I felt vulnerable and anxious, stuck between a rock and a hard place. I didn’t want a door slammed on my descendants in the future. I wanted to defend my own right to voice critical perspectives about the process and not be shut out from being able to speak.

So, I enrolled. Not out of faith or hope, but out of defensiveness, grave doubt and a measure of shame. How can real nation-building be founded on campaigns and processes that stir up and depend on such emotions?

I share this story because I know there are others like me, who enrolled not because we were inspired but because we were having normal responses to a campaign utilizing fear tactics. By the way, the new DOI procedures have now made the concern of being “left out,” if one is not on the roll, moot. Section 50.12(a)(1)(B) of the proposed rule

provides that a roll of Native Hawaiians certified by a State commission or agency under State law may be one of several sources that could provide sufficient evidence that an individual descends from Hawaii’s aboriginal people.

These tactics have been coupled with the problem that the whole Kanaʻiolowalu and Naʻi Aupuni process has been sorely lacking in real community-based education and dialogue. Millions were spent on developing the roll and on PR, but serious conversations amongst a broad range of our community were not prioritized. Because of the dearth of public dialogue and the speed by which the process has been pushed through, many people have had to make decisions based on a small amount of information and without the benefit of collective dialogue and deliberation.

I also share my story of my own fear because too often there is no room in activist movements to talk about our vulnerabilities. We are supposed to be strong and 110% confident in our position. We are not supposed to have moments of doubt. And yet we do. We are, after all, Kanaka—human. And when we are constantly fighting powers that try to eliminate or assimilate us, we need the shelter of communities who love and accept us with all our flaws and doubts. We need relationships in which we can compassionately hold each other accountable.

Since the candidate list was released, I have seen some independence-affiliated Kānaka spitting fire at our own people who are running or who are on the roll. I have witnessed people severing relationships with others whom they see as being “on the other side,” calling people “sell-outs,” “traitors,” or “war criminals.” This is just as violent, divisive and dangerous as the “LEFT OUT” ad. This kind of name-calling and avoidance of real dialogue equally shuts down conversations where people can work through difficult decisions and share inner conflicts. True unity will never come without greeting people’s vulnerabilities with aloha. Name-calling is the easy way out, so one can feel self-righteous.

Recently I had been trying to work out my own inner conflicts by reflecting on a fantastic metaphor that my hoa from MANA, Andre Perez, offered in response to those who urged all Kānaka to get in the waʻa and sign up on the roll. Andre has pointed out that we need to be aware of the fact that the waʻa is not in the water but rather it is on a trailer being driven toward state and US federal recognition.

This waʻa represents our collective consciousness as a lāhui. The state-sponsored legislation that initiated the roll, Act 195, has attempted to tether that consciousness to the trailer of state recognition. Now that the US Department of Interior has issued its proposed path for a government-to-government relationship, it is undeniably clear that the truck hauling this trailer is barreling toward US federal recognition. And here is the danger: it is driving toward a settlement of our lands and national claims. This past week, I decided to disenroll.

My decision to disenroll is framed by a few core beliefs. I still believe that we need to untether the waʻa from the settler state’s truck and trailer. I still think that we need Kānaka who have already boarded the waʻa to loosen the bindings, to try to unhitch the trailer while it is already in motion. And I still feel the potential dangers of us turning violent against each other in that process. But the DOI’s recent announcement of proposed procedures has me convinced that we need greater numbers of Kānaka who are willing to blockade the road that this truck and trailer are currently on.

As I read the DOI’s proposed procedures last week, the document hammered home, in mind-numbing government-speak, the way the settler state will still try to erase our presence and our voices even when we speak to them on the record and in their forum. In the entire twenty-page document, there was not a single mention of the outpouring of verbal, face-to-face testimony that Kānaka and our allies brought to the various DOI hearings throughout the islands in the summer of 2014. Anyone who attended those meetings or watched them online will know that the DOI’s formal assertion that “a large majority of the commenters supported Federal rulemaking to facilitate reestablishment of a formal government-to-government relationship” is, to use a technical term, a crock of shit. The DOI could only come to this conclusion by completely ignoring all the people who chose to spend several hours of their family and/or work time to come out and offer their mana‘o face-to-face, rather than just through identical postcards that someone else wrote. Moreover, the DOI makes clear that those of us who talked about the United States illegally occupying Hawai’i were basically ignored because that issue “was outside the ANPRM’s scope and therefore did not inform the development of the proposed rule.”

So, I decided to disenroll because it has become crystal clear to me that even when we try to meet them in good faith on their terms, offer testimony in their meetings, and speak the truth of what is in our na‘au; they will not hesitate to bury our voices when we challenge US authority in our homeland. If there was once any strategic value in my being an informed, critical voice within the Na‘i Aupuni process, I no longer see that possibility.

Additionally, I want to say that I did not decide to disenroll because of intimidation by a few dogmatic individuals who suddenly called me a traitor when they saw my name on the roll. I came to this decision because a trusted group of friends from MANA helped make a safe space to discuss my/our vulnerabilities in these dangerous, divisive and violent times. I came to this decision because they helped me see how my own personal decisions impact what others see as the horizons of possibility for our lāhui. They helped me see that by giving in to fear, I can crush the hope of others. They reminded me that our mana grows when we hold on to each other. While I have decided to stand on the road with my hoa, I will never launch or support personal attacks against my brothers and sisters who remain on the roll or as candidates to become delegates. Instead I remain hopeful that those of us who will be critiquing and protesting the process can open a window of time to allow as many Kānaka as possible to participate in lifting this waʻa off the settler state’s trailer. I remain hopeful that against dangerous, divisive and violent circumstances, we Kānaka can come together to carry our waʻa back down the long road back to the ocean. 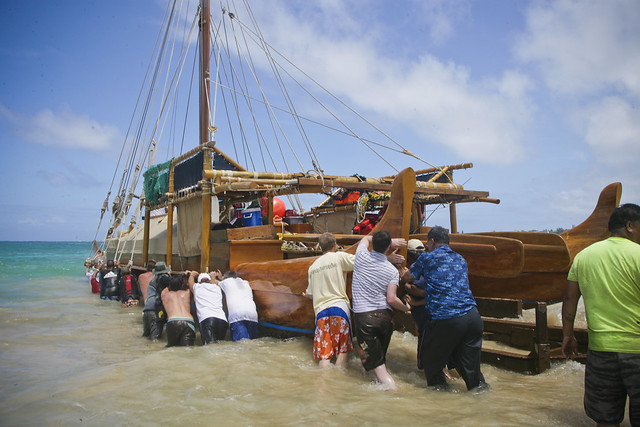 “Iosepa Launch” by BYU-Hawaii via CC 2.0