We Live in the Future. Come Join Us.

“Hawaiians need to stop living in the past.” We’ve all heard this before, and we’re probably going to hear it a lot in the coming days. Brave people are getting arrested up on our sacred mountain right now in frigid temperatures (there was even a blizzard there a couple of weeks back), continuing a years-long fight and engaging in a blockade to prevent the further cultural and environmental desecration of the very piko, the umbilicus, the center of our islands by the Thirty Meter Telescope. I attended an overnight vigil a few nights ago on our island to show support for these koa on theirs, and we got an update via phone from Kahoʻokahi Kanuha and Lanakila Mangauil, two of the humble young leaders of the blockade. I stood at the edge of the torchlight and wept as they spoke, struck by how the depths of their aloha manifested in a fierce love not only for the ʻāina that they were protecting but for those who stood in opposition to them.

It could not have been clearer from the words and the actions of the people up on the mauna and those standing in solidarity with them that they are concerned with nothing more than the very future of our world, our islands, and our people. Yet in boardrooms and newspapers, social media and overheard conversations, they have already been accused of “living in the past” or even of “wanting to keep Hawaiʻi in the Stone Age.” In fact, in an article on an earlier blockade to stop the Thirty Meter Telescope this past October, a science writer for the New York Times connected the action on the mauna with the repatriation of Native American burials from museums, and lumped them all together as an anti-science “turn back toward the dark ages.” Now, as much as I am devastated and inspired by what is going on up on the mountain one hundred and eighty-five miles away, this is not a post about Mauna a Wākea, because I am a malihini to that place and that issue, and can only say that I stand in support of our steadfast koa in those rocky heights.

What this post is about is how any time Hawaiians—or any other native people, for that matter—come out in force to push for more respect for our culture and language or to protect our places from this kind of destruction, we are dismissed as relics of the past, unable to hack it in the modern world with our antiquated traditions and practices. Though the very things that people say they love most about Hawaiʻi are actually what Hawaiians and their allies have been trying to protect for decades, we are still considered nothing more than speedbumps slowing everyone down on the road to progress. We are even smugly condemned as hypocrites for daring to use smartphones and social media and cars or any kind of technology in our activism, because somehow asserting ourselves as modern, innovative, future-looking native peoples does not jibe with the image of living fossils that the rest of society seems to have of us.

Yet remembering the past does not mean that we are wallowing in it. Paying attention to our history does not mean we are ostriching our heads in the sand, refusing to believe that the modern world is all around us. We native peoples carry our histories, memories, and stories in our skin, in our bones, in our health, in our children, in the movement of our hands, in our interactions with modernity, in the way we hold ourselves on the land and sea. Sometimes people see themselves implicated in the injustices and abuses we wear so clearly on our selves, and it makes them uncomfortable. They see a queen deposed and held prisoner in her own palace. They see children taken away from their tribes to abusive boarding schools, shorn of their hair, and made to refuse their native language. They see people and animals used as guinea pigs for nuclear experiments, the only outcry coming from those concerned about the animals. It makes them want to look away and ignore us. It makes them tell us to stop showing it to them. They are the ones who want us to only be living in the past, so that their pain can end.

But we don’t carry only pain, we carry connection. Whenever we resist or insist in the face of the depredations of developers, corporate predators, government officials, university administrators, or even the general public, we are trying to protect our relationships to our ancestors, our language, our culture, and our ʻāina. But at the same time, we are trying to reawaken and protect their connections as well.

That short-sighted model of “progress”—that we seem to be standing in the way of—hinges upon all of us, all of Hawaiʻi’s people, all of the Pacific’s people, all of the world’s people losing connection to land, to sea, to other human beings. The less you feel these connections, the easier it is for you to be convinced that unrestricted development is the highest and best use of land. That kind of progress means the University of Hawaiʻi and its international partners justify building on Mauna a Wākea by pointing to permits and documents that they have secured rather than any real sense of kuleana. That progress means farms exploit migrant labor and then label their products as organic and sustainable. That progress means Freeport McMoRan and Rio Tinto brag about the amazing knowledge it took to build the largest copper mine in the world in the mountains of West Papua but insist that they don’t know how to keep it from polluting the entire Aghawagon River ecosystem. That progress means our state tries to legislate homeless people out of existence because they are an eyesore for tourists but do nothing about the structural inequalities that force them to live on the sidewalks of Kakaʻako and in the bushes of Waiʻanae Boat Harbor. All of these things done in the name of rootless progress show (un)surprisingly little care for trying to truly progress and create a future that we all want for the coming generations.

And when you see the possibility of “progress” in this more connected way, you see that we are actually the ones looking to the future. We are trying to get people back to the right timescale, so that they can understand how they are connected to what is to come. One of the urgencies for the construction company trying to break ground for the telescope on the mauna is that they have a limited time in which to execute the contract. But we are operating on geological and genealogical time. Protecting the ʻāina, carrying on our traditions, speaking our language, and acting as kahu for our sacred places are not things measured in days, or weeks, or even years. This work spans generations and eras and epochs. 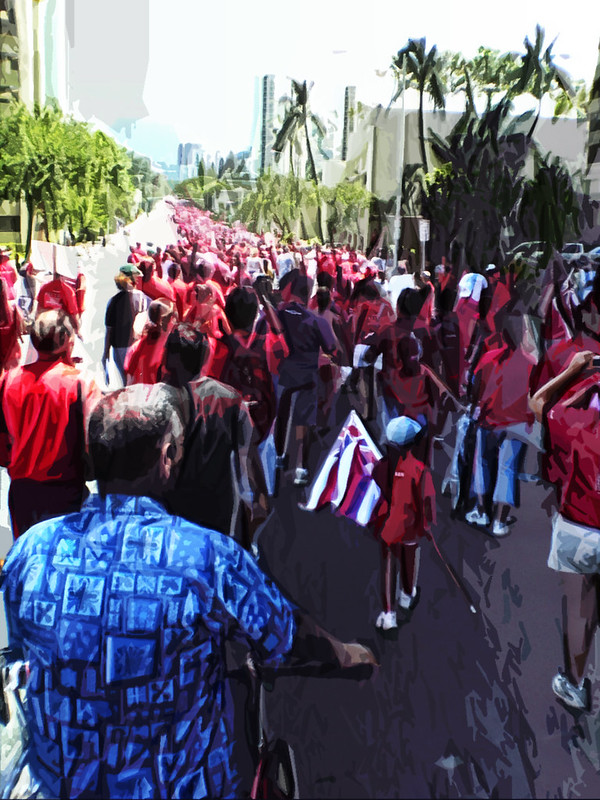 Our genealogies are a backbone stretching to the very inception of these islands, and when we understand our genealogy, we know our origins, where we have been. We always have our ancestors at our back. That certainty gives us a wider possibility of movement, a more supple way to navigate through the world. Standing on our mountain of connections, our foundation of history and stories and love, we can see both where the path behind us has come from and where the path ahead leads. This connection assures us that when we move forward, we can never be lost because we always know how to get back home. The future is a realm we have inhabited for thousands of years. You cannot do otherwise when you rely on the land and sea to survive. All of our gathering practices and agricultural techniques, the patterned mat of loʻi kalo, the breath passing in and out of the loko iʻa, the Kū and Hina of picking plants are predicated on looking ahead. This ensures that the land is productive into the future, that the sea will still be abundant into the future, and that our people will still thrive into the future.

Note: A few people have mistakenly read this post as an explanation of why I am against the telescopes, which it is not. It takes my opposition to the telescopes as a jumping off point, but is not meant to serve as an explanation of it. There are many places you can go to find cogent and thoughtful opposition to the telescopes, and these links relating to the struggle over Mauna Kea are just a few examples to give you a sense of what is going on. A recent BuzzFeed article is a good primer to some of the basics of the situation. This piece from Kāhea: The Hawaiian-Environmental Alliance outlines some of the legal protections afforded Mauna Kea, and this is a slightly dated but still relevant basic overview of the opposition to the telescopes. Also a Twitter discussion among astronomers. But please do some research on your own because there is a lot of complexity to this issue that isn’t really getting conveyed in most discussions. There is also some really inspiring activity going on about the mountain right now. Please sign this petition to halt the arrests and construction if you are so moved.